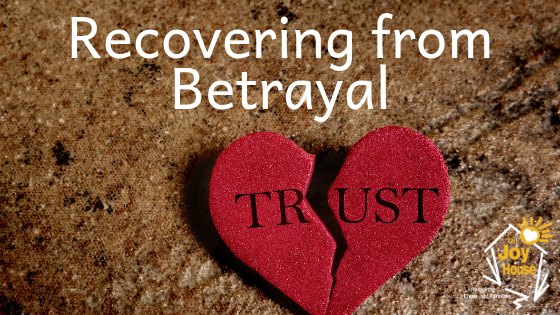 Some of the hardest lessons in life include betrayal. Like when you think a relationship is one way, and then discover that it isn’t like that at all. Betrayal can feel like you’ve been completely tricked (even foolish) after you’ve poured your heart, soul, and time into another human being. Pain includes the perception that the other person’s part of the relationship rested on a phony foundation. We may wonder if anything in the relationship was real. We may also wonder what our responsibility is with the other person, or where do we go from here?

People handle the hurt of betrayal in many different ways. Some act as if nothing happens, choosing to never speak with the “betrayer.” Others vow to never trust in, or talk to, that person again. This can be driven home by saying things like, “you’re dead to me,” or “you mean nothing.” The truth is that when we get hurt, we oftentimes want the offender to experience pain, too. Before we know it, we carry the other’s offense(s) within our hearts, where bitterness, retaliation, or victimization can grow. I know that closer relationships often carry the greater severity of woundedness, but there has to be ways to find healing for even the deepest acts of deception. I know this because I witnessed a recent example.

Deception and betrayal must be exposed and discussed. Confronting the other person’s betrayal is imperative. Strong emotions, thoughts, and even tears are an important step in your healing. Let the other person know the damage done to the relationship. They earn the loss of your trust. If it’s a teenager, they lose freedom; a spouse, they also earn accountability.

Moving people “out” of their current spot of relational intimacy. Think of a bullseye with many rings. The betrayer may have been in the second ring from the center prior to their deceit, meaning the relationship was very close and seemingly healthy. Moving them out to ring three or four is a practice in healthy boundaries. You move people in and out of your boundaries – not them. This means that certain privileges and non-essential access to you is diminished. Yes, in the case of a parent-teen, you still provide a roof, food, and clothing, but frills can be forfeited.

Keep loving. In the example I witnessed, the parents kept their love in full view. They fought against the natural tendency to lash out, or to return pain for pain, never saying those words meant to destroy the other person. They spoke of the pain they felt from the deception. They let the betrayer know that trust is crushed, and boundaries called for a “moving” to an outer ring of the intimacy bullseye. The parents have pursued communication, reaching out to maintain some semblance of connection. Life has changed drastically for all involved, and it is NOT the life hoped for by the parents, but their love has remained. Love keeps bitterness, retaliation, and feeling like a victim in check.

Darren Lane has been a part of The Joy House team since 2008, initially serving as a Counselor for the Residential Program, and then becoming our Director of Therapy. Darren has lived in Pickens County for almost 40 years. Darren has a B.S. from Kennesaw State University in Psychology and a Masters in Family and Marriage Counseling from Liberty University.