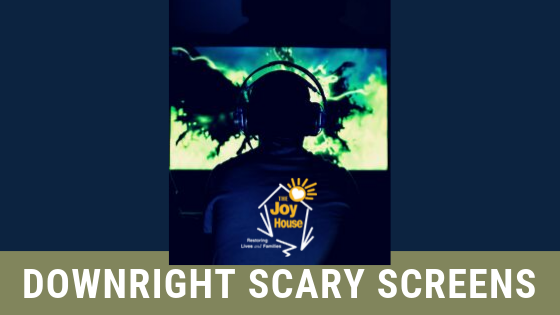 Grand Theft Auto, Call of Duty, World of Warcraft, Fortnite, Minecraft—any of these sound familiar? How about Facebook, Twitter, Snapchat? If not, google them on the cell phone. Video games, social media, and cell phones are no longer novelties; in fact, they are now practically embedded in our culture. Our first impression of all these was likely that they were incredible communication devices at best and harmless entertainment at worst. However, the data regarding the effects of interactive screens on our children are now coming in, and the result is downright scary.

At Eagle Ranch this month, the Joy House staff was updated on this data by Melanie Hempe, retired RN, author, and founder of Families Managing Media and Screen Strong. Motivated by her oldest son’s initial interest in video games to his final gaming addiction that led to strife in the family and his dropping out of college, she began to research the science behind interactive screens and the effect that they have, especially on young brains. What she found is a wolf in sheep’s clothing.

One of the most obvious effects of these new technologies is their isolating nature. All of us have seen groups of people at dinner or in the park, not talking to each other but staring at their cell phones. We have seen hundreds of pictures, not of kids with their friends having fun, but of food or of a single individual posed in front of a mirror. Our kids almost become strangers as they become immersed in a video game, often played in their own room away from friends and family. In fact, research shows that their brains actually begin to interpret the real world of family, friends, and school as mere nuisances that keep them from their new world, the world of the video game, Facebook, and Twitter. Their friends and family are no longer flesh and blood humans, but images on a screen.

The screens are not just keeping our kids out of the living room and away from the family; they are rewiring their brains. Parents of enthusiastic gamers and social media fans know the conflict that comes with saying, “Time’s up,” or “Give me your cell phone.” Why is turning off a game, parting with a cell phone, or leaving Facebook for a few minutes such a monumental conflict? Because neuroscientists have been hired by game and social media developers to ensure that users have difficulty leaving it. People highly skilled in brain mechanics are being paid to use addiction technology to lure our children onto the screen and to keep them there.

Once those developers have them on the screen, isolated from family and friends, what do they teach them? Well, consider video games. It is a rare game that has the child in the role of law-keeper. Instead, players are the bank robber, the terrorist, the one who is running from the law. Points are given not for rescues, but for kills.  In fact, Lt. Dave Grossman asserts that the violent world of the video game is practically identical to the training given to soldiers going into war, training designed to numb them to kill people.

We have a mental health crisis in our country. One in five children has mental health problems. The diagnosis of ADHD has risen 53% in the past 10 years.  Suicide has become the second leading cause of death in the world for ages 15-24, and research shows that 71% of teens who spend five or more hours per day on their devices are more likely to have at least one risk factor for suicide.  Between 2010-2015 in children between the ages 13-18, there has been a 23% increase in suicide attempts and a 31% increase in actual suicides. The link between interactive screen use and the onset of ADHD, depression, and anxiety can no longer be ignored.

The time has come to reclaim our children, to snatch them out of the hands of predators and to give them a safe place for their brains to develop in a healthy way. Wouldn’t it be amazing if by just removing a couple of items from our homes and their back pockets, we could help eliminate our children’s pain? If the idea of beginning to remove these items from a child’s life is overwhelming, check out screenstrong.com and click on the resources link to get guidance on how to navigate this journey.  It could be a game-changer.

Robin Whitaker has served as the Joy House Academy classroom teacher since 2015. She attended Reinhardt College from 1980-1982 and graduated from Kennesaw College in 1985.  She is certified in English and Secondary Education as well as in Gifted education. Over her thirty-year teaching career, she has worked with students at all levels, from the honors to the at-risk population.