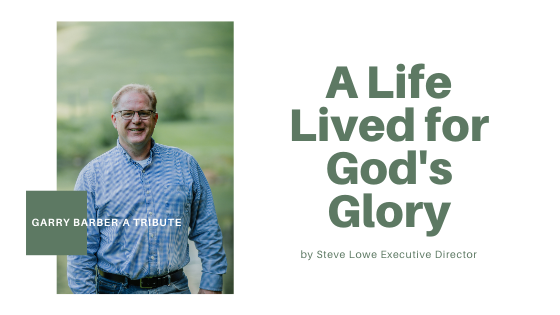 A Life Lived for God’s Glory

As I sit to write this it’s still hard for me to believe that Garry is no longer with us. What a tremendous blessing it was to share life and ministry together with Garry for these last 9+ years and be counted among his friends. I’m a better man for knowing him and under his leadership and guidance The Joy House Counseling Center has become what it is today. I’d like to pay tribute to my friend, let me start with how we met.

Around 2010-11 I began hearing about this tremendous Christian counselor in our community. He had been used by the Lord to help many people I knew. In 2011 we met for the first time over lunch and there was a shared bond between us in our love for Christ, people, family, and community. It was clear to me that Garry was blessed with a special gift to counsel. We continued that friendship over the coming months and I became concerned about losing him as a resource in our community because of funding. Through those conversations the Lord got the idea on the table between us of what if God wanted to use us together. Neither one of us could escape this possibility, this vision gained life under God’s direction.  The Joy House was well established at this point and I felt we could raise the necessary funds and free Garry to use his gift. It is through our relationship that The Joy House Counseling Center was born. The counseling center was launched in the spring of 2012 and under his leadership over the last 8+ years it has become what we envisioned, a regional resource for Christ-centered counseling along the 515 corridor where every client can find the help they need at an affordable price. So many lives have been touched by the Lord through him personally and under his leadership.

There are many things that made Garry special, I’d just like to share a few that stood out to me. He loved Christ with a genuine love, and was sensitive to God’s call on his life. His relationship with Christ shaped his identity. The fruit of God’s spirit was truly evident in his life. He had a genuine compassion for people that gave him this special ability to make people feel like a friend. He often said of our clients at the counseling center, that we wanted them to feel like friends and that is how most of them felt.

What great conversation he and I enjoyed having about our families. He loved Judith and all his children and was so proud of them. Christ is evident in each of their lives and the rich investment their father made in them. These conversations centered around missions, music, sports, etc… I know their father’s love will live on through them as it is already in great evidence.

I also enjoyed Garry’s humor. We often laughed together even during our staff meetings. Garry didn’t take himself too seriously, there wasn’t anything stuffy about him. What you saw was what you got and it is one reason he was so engaging with people. One of the funny things between Garry and I was that we were often mistaken for each other. This was a running joke between us. We truly were brothers in Christ and we often got a chuckle when people mistakenly identified us. Garry always said he was the good-looking one.

I’m going to miss my friend and partner in mission. I know he received a “well done my good and faithful servant” from our heavenly Father. I’m committed to seeing that the good work he did here with our counseling center will continue. We will honor his legacy by continuing his mission of love to the hurting through the counseling center. Our future counseling center building will be named in his honor.

Thank you Garry for making a difference in my life and for our service together, I know it was ordained by God and I’ll look forward to being reunited when I return home to our Father.