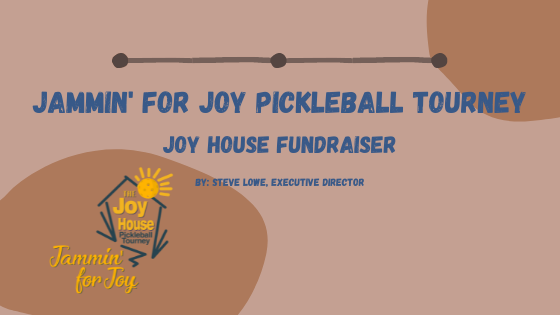 Eighty pickleball players and guests descended on The Courts @ Bent Tree for the inaugural Jammin for Joy pickleball tourney. Play was filled with a lot of dinks, slams and drop shots. We are humbled and thankful for the incredible response and success of the first ever pickleball tournament held in Pickens County. For our first tournament we simply did a one-day mixed doubles format. That is where a man and woman partner together to form a team.

After our morning session completed we then gathered all our players from the morning and upcoming afternoon sessions for some prizes and to share about the ministry. We were blessed by some of our local businesses who gave door prizes. We gave away 20 to 30 door prizes which were enjoyed by our players. Our friend, Hans Rueffert, brought several free appetizer cards for the Old Mule House, and we enjoyed a funny scene as we sat them on a table for first come/first serve and many of our players scampered to get one. We then shared briefly about the ministry of The Joy House and Trey, one of our young men, shared a testimony. All of our pickleball friends were an encouragement to him.  During the afternoon several of our players made additional donations to the ministry. We then moved to draw for our raffle prizes which we had sold tickets for throughout the morning. We had three great prizes: two Seikirk pickleball paddles and a Braves ticket package. It was a lucky day for our pickleball friends from Gilmer County as some of their players won all the raffle prizes and were genuinely happy to do so.

Our afternoon session of 3.5+ level players took to the courts to battle for gold, silver and bronze. This was the same play format as the morning. The top team from each pool advanced to the medal round. We enjoyed the display of some high-level pickleball play in our medal round.  We had four great teams battling it out. Our gold medal game was neck & neck with the winner winning by 1 point.

We want to say a special thank you to Talona Ridge RV Resort as our presenting sponsor. We also want to recognize specially our friends at 1-800-Packouts who sponsored our shirts and Woodstock-Church Jasper for sponsoring our player cooler/bags. We also want to say a special thanks to general manager Tom Fowler, and tennis/pickleball pro Mike Larscheid of Bent Tree for their partnership in allowing us to host our tourney at such a great venue. An extra special thanks to all of our fellow pickleball players from Bent Tree who volunteered to make this such a special event.

The pickleball community is a generous and fun group of people. Because of their generosity and those of our sponsors we raised approximately $8000 for the ministry. This far exceeded our initial hopes. We’ve enjoyed a tremendous amount of positive feedback regarding the tournament. We’re encouraged as we begin dreaming and thinking about how the tournament can be bigger and better next year.  I hope many of you will be encouraged to find out more about this great sport of pickleball.