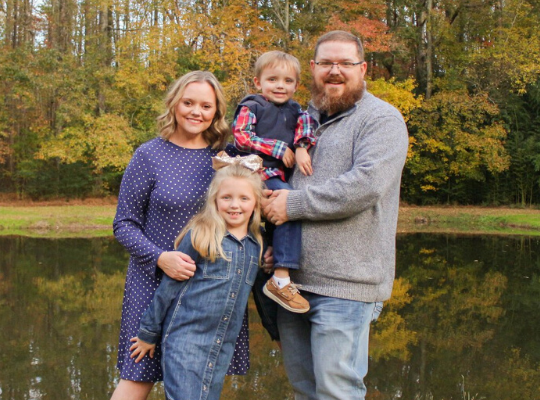 Nick and Kristen Richardson are the houseparents in the boy’s home at The Joy House. Before coming to The Joy House, they lived in Louisville, Kentucky where Nick was attending Southern Seminary. Nick and Kristen have served in youth ministry for many years working in Marietta and Cartersville, GA as well as Bogata, Texas. While attending seminary, the Lord made it clear that it was time to pursue another ministry opportunity and led them to The Joy House where they are so excited to serve. They joined the Joy House team in February 2018.

Nick was saved at a young age at his home church in Marietta, GA and felt called to ministry early on as a teenager. As soon as he graduated high school and chose to attend a Christian college in Atlanta, he began serving in youth ministry internships alongside pastors and mentors. He graduated earning a bachelor’s in Human Relations with a minor in Biblical Studies.  Kristen was also saved as a young child and was heavily involved in her church and youth ministry as a leader. She graduated with a bachelor’s in Early Childhood Education and taught fifth grade for seven years in Cobb County where she also earned her master’s degree. The Richardsons met at Atlanta Christian College, dated throughout, and married in May of 2007. They have two children, Avery and Sawyer. As a family they enjoy spending time at parks and outside and being involved in ministries and activities at church. Avery loves playing and using her imagination, while Sawyer loves being outside with his dad.

Nick is excited to have the opportunity to share his love of disc golf and fishing with the boys in their free time. He has a passion for sharing the Word of God daily with the boys so that they too can know where their hope is found. Kristen feels blessed to be able to serve alongside Nick and provide another parent figure to the boys at The Joy House while developing meaningful relationships in a safe, comfortable home.

Nick and Kristen couldn’t feel more blessed for the opportunity that the Lord has provided for them at The Joy House. They will strive daily to reflect Christ in all they do as houseparents for the boys.